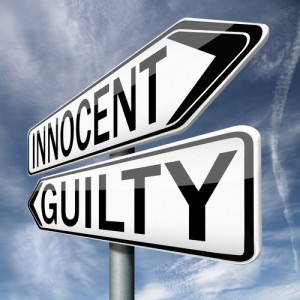 There are several ways that a person can be charged even if they are not present at the scene of the crime. One does not necessarily have to be present or even actively participate in a crime to be charged. Often this happens when people get involved in events either prior to or after another person commits the actual criminal act. One such way a person can be charged is known as criminal responsibility. According to Tennessee Code Annotated section 39-11-401 a person may be criminally responsible as a party to a crime if the crime resulted from that person’s own conduct or the conduct of another person for

A person can also be charged with Criminal Facilitation under Tennessee Code Annotated section 39-11-403, which makes is a crime for a person, knowing that another person intends to commit a felony but without the required intent to be a party to the crime, knowingly furnished substantial assistance to the person committing the felony. For example, a person supplying items to someone who knows that the person intends to use those items to commit a felony may be guilty of Criminal Facilitation. Tennessee Code Annotated section 39-12-102 also makes solicitation a crime. Solicitation occurs when a person intentionally commands, requests, hires or attempts to hire another person to commit a criminal act and intents for that criminal act to be committed. However, the solicitation need not be successful nor must the actual solicited crime actually be committed. It is also no defense if the person solicited lacks capacity or status to commit the crime. Conspiracy is another crime in which one may be charged but not be present. Conspiracy occurs when two or more persons agree that one or more of them will engage in criminal conduct that is the object of the conspiracy. The actual crime need not ever be committed. Every conspirator must satisfy three elements:

At least one of the conspirators must also commit an overt act. Under Tennessee Code Annotated section 39-12-103 a conspiracy ends when the objectives of the conspiracy are complete, or when an individual conspirator abandons the agreement, but the conspirator remains liable for the conspiracy and all crimes resulting from the conspiracy that are completed prior to his abandonment. Even after a crime has been committed a person may also be an accessory to that crime. According to Tennessee Code Annotated section 39-11-411 a person may be an accessory after the fact (a Class E Felony) if he knows or reasonably believes a person has committed a felony and then hides the offender, assists the offender in avoiding criminal prosecution, or warns the offender about discovery or apprehension with the intent to hinder an arrest or criminal prosecution. If you have accused of any crime in Murfreesboro, Smyrna, La Vergne, or greater Rutherford County, contact an experienced criminal defense lawyer immediately. In particular, the crimes described above can be complex and require an experienced and agressive criminal defense attorney. You’ll need help to understand these issues and involve them in their own defense. With so much at stake in a criminal case, don’t take a chance on an inexperienced or lazy defense lawyer.

Latest posts by Stan Bennett (see all)
Previous Post Free Report: Constructive Possession in Tennessee Criminal Offenses
Next Post What Must the State Prove to Find Me Guilty Of An Offense?